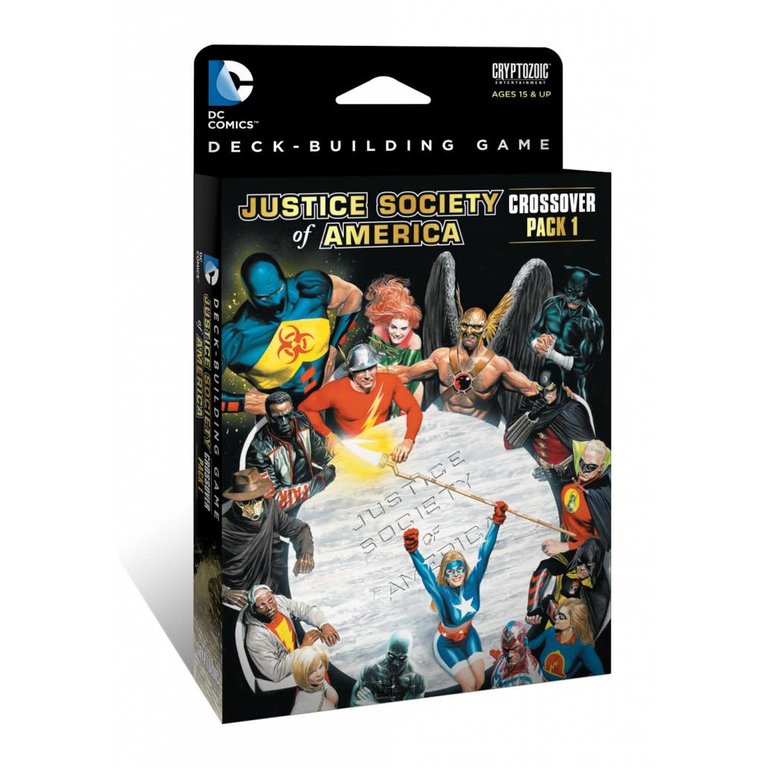 The DC Comics Deck-building Game Crossover Pack series is a way to breathe new life into your game with just a few tweaks. Grab your favorite DC set and instead of using the Super Heroes and Super-Villains from that set, use the ones from this pack instead! Playing as a new JSA Super Hero will add new strategies and goals to your gameplay. New Super-Villains will spice up the First Appearance Attacks that players have grown to love and fear. Finally, a few signature Super Powers, Equipment, Heroes, Villains, and even a Location for the main deck will add a little bit of extra JSA flavor to the set. Crossover Pack #1 features the Justice Society of America, usually known simply as the JSA. These classic Super Heroes have been around for a long time and often claim top talent authors and artists, such as the worldfamous Alex Ross! You will find several pieces of his work in this very set. Their stories continue to this day and feature characters extremely important to the DC lore, such as Doctor Fate and Power Girl. Naturally, these Super Heroes will be fighting against their own stable of classic Super-Villains, such as Solomon Grundy, Eclipso, and Ultra-Humanite! The JSA flavor continues with some of the Super Heroes’ own abilities added to the main deck: Mystic Bolts and T-Spheres. Crossover Packs are the perfect way for players to customize their DC Comics experience to suit their own tastes and to play with their favorite characters!